The family portrait in interior By Boris Gulko 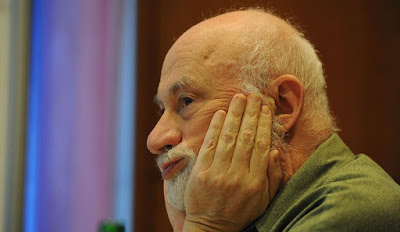 The book about our ancestors, about our formation, character, history, about the types of Jews is the main book of mankind. It is called the Bible.

The first Jew, Abraham, was wise and powerful.

Our third patriarch Jacob was “a meek man who lived in tents” (25:27). From him come the Jews who study the Torah and have kept Judaism for three and a half millennia. And later Yakov “fought with the angel and with people, and won” (32:29). This is already the type of Jews who overcome difficult obstacles on the way to the goal. The descendants of Jacob's 12 sons spread throughout the world. Everywhere they are successful, and nowhere do they have peace - "they are fighting with an angel and with people."

The wives of the patriarchs were focused on procreation. Israeli women keep this tradition. Their country is now the only state in the Western world with a healthy demography - 2-3 times more children per woman than in Europe.

Their other battlegrounds are their husbands. The Almighty commanded Abraham: "... whatever Sarah tells you, listen to her voice ..." (21:12). And Rivka, without unnecessary disputes with her husband, faked the abduction of Yakov the blessing of the firstborn, prepared by Isaac for Yakov's twin Eisav.

Laban, the father of Jacob's wives, the brother of his mother Rivka and the grand-nephew of Abraham and Sarah, took Jacob in at a difficult moment. He gave him his daughter to be his wife, and he even imposed Leia by deceit. He and Yakov had property disputes, and Yakov managed to surpass him.

Laban’s influence on the Jewish people is great. In the Passover Haggadah we remember him harshly: "Laban strove to eradicate everything." From him the Jewish people inherited universalist tendencies, the desire for assimilation. Because of this aspiration, there are still fewer of us in the world than Chinese.

A surge in the population of Jews from the root of Laban has been observed recently. In today's United States, about 80% of Jews enter mixed marriages, and if we remove the Orthodox from the statistics, then the figure will probably approach 100%. American Jewish universalists support the anti-Israel Democratic Party and the BLM organization, 58% of them approve of Biden's policies hostile to Israel. If we take away the Orthodox again (only 19% of them support Biden), this figure will also skyrocket.

55% of American Jews are satisfied with the desire of the Biden administration to conclude a new treaty with Iran, giving it funds for Jihad and the ability to complete the creation of the atomic bomb.

Recently, the Israeli government entered into large agreements with Google and Amazon to create a cloud of information. During our last war with Hamas, 250 Laban-tipe Jews at Google sent an anti-Israel letter to the CEO of their campaign manager, Sundar Pichai, arguing that anti-Zionism is not anti-Semitism. A similar anti-Israeli document was published by 500 Amazon employees.

A member of the family of Abraham and Sarah was their nephew Lot, who came with them to Canaan. When, during a great war, Lot, along with other inhabitants of Sodom, in which he lived, was captured, Abraham armed the household, defeated the aggressors and freed Lot.

Jews are a people who brought into the world the concept of sexual morality, commanded to us by the Torah. But Sodom and Gomorrah, symbols of immorality, were in the Land of Israel. After the destruction of Sodom by the Most High, Lot took refuge with his two daughters in a cave, where the daughters conceived from him. Women, descendants of Lot's daughters, married Jews. There is a Bible book of Ruth about one such marriage.

But today, sex prohibited by the Torah is not uncommon among Jews. So a few years ago, the mayor of Tel Aviv promised to make his city the world's gay capital. And in America, Jews are prominent among the leaders of the homosexual community.

About the third generation from Abraham of the founders of our people, the twins Jacob and Eisav, nicknamed Edom, it is told: Isaac prophesied in blessing Edom: “And by your sword you will live, and you will serve your brother; but when you are indignant, you will overthrow his yoke from your neck. " And Eisav Jacob came to hate (27: 40-41).

The biblical path of the Jews was limited by the descendants of Jacob. For 15 centuries, the descendants of Edom, the Edomites, lived separately from them. But at the end of the 2nd century BC. Hyrcanus I Johanan of the second generation of the Hasmonean dynasty, who ruled the Jews, conquered the Edomites and converted them to Judaism. Since then, the enmity of the brothers has returned and firmly settled in the united people.

Already during the reign of the son of Hyrcanus I, Alexander Yanai, a bloody civil war broke out, almost depriving the Jews of independence. They lost it as a result of the next civil war - between the sons of Alexander Yanai. A hundred years later, a new civil war led in 70 A.D. to the destruction of Jerusalem and the Second Temple, and as a result - to the dispersion.

The history of the Jewish state, restored on May 14, 1948, continued the history cut short by the destruction of the Temple, with the same internal national problems that existed then. There is no more variegated people than today's Israelis, dragging behind them the accumulated heritage of our ancestors. Now we have a chance to correct something and overcome the enmity living in our people, left over from the brothers Yakov and Eisav.

Today's Israelites can be divided into two large groups: following the religious and national traditions of the forefathers, and universalists in the spirit of our ancestor Laban.

A quarter of Israelis are Orthodox: about 10% are Haredim, belonging to the tradition of Jacob, “living in tents” (however, you cannot call them meek); the rest - “fighting with the angel and with people, and conquering” - are religious Zionists. Orthodox are divided into myriads of small groups, differing in styles of clothing, attitude to the state, to secular education, to work and service in the army.

There are about the same number of "Masortim" - traditional Jews among the Israelis as the Orthodox. According to the latest poll, there are 27% of them. These, too, abide by Jewish laws, but not as strictly as the Orthodox. American forms of religion - conservative and reformist - are unpopular in Israel. Ben-Gurion[i] is quoted saying: "A synagogue that I do not go to must be orthodox."

The share of the secular population of Israel, bearing more or less the influence of the legacy of Laban, is less than half. And it decreases because of the lower productivity of women than among the Orthodox, and because of emigration, however, which is melting as the quality of life in Israel increases.

This population includes the followers of the traditions of Sodom and the Lot family. The visibility of these exceeds their number. As soon as the war and pandemic died out, on June 3, another gay pride parade took place in holy Jerusalem. And on June 25, such a parade is scheduled for the embankment of Tel Aviv.

The Laban tradition includes a significant portion of Israel's liberal arts class, as well as university graduates and students indoctrinated by left-wing professors as well as the legal nomenclature. These Israelis disapprove of the recently adopted Basic Law on the Jewish Character of the State and would like to see Israel as a country for all its citizens in the spirit of the United States and Canada. Some of these citizens have anti-Jewish and anti-Jewish sentiments.

As an extreme case, the anti-Semitic International Criminal Court (ICC) recently filed a "war crimes" case against Israel, which was defending itself against Hamas attacks, and 185 Israelis - including 10 Israel Prize winners, 35 professors, senior IDF officers in retirement, suggested court his services in the investigation of these mythical "crimes".

This proposal was supported by the leader of the leftist party Meretz Nitzan Horowitz, and the deputy state prosecutor Nurit Litman ruled that support for the ICC investigation against Israel cannot be equated with treason.

Similar anti-Israel and anti-Jewish sentiments exist among some of the Orthodox. Satmars, Naturey Karta, some other sects do not recognize the state of Israel, reject government subsidies, declare the country's independence day a day of fasting and repentance, considering the very fact of the formation of Israel as a continuing catastrophe of the Jewish people.

A separate place among those belonging to the Laban tradition is occupied by economic emigration from the former USSR. Many of them are trying to live as in their past country, celebrating its holidays, voting in its elections, and would like the signs of Jewish laws and traditions in Israel to be erased. They are represented in Israeli politics by the NDI party.

It should also not be forgotten that more than 20% of Israel's inhabitants are mainly Arabs hostile to it.

Until now, after elections, which almost always take place more often than required by law, it has been possible to form a government capable of leading the country. Great military victories were won and miserable political failures occurred. The past 12 years of the dominance of the right-wing Likud party in Israel and the premiership of Netanyahu have seen impressive economic growth and major diplomatic breakthroughs. Netanyahu is the only Israeli politician of recent generations who belongs to the type of Abraham, and with his diplomatic skill and vision of the situation has strengthened and promoted Israel's position in the world.

But now, after 4 consecutive elections that have demonstrated the inappropriateness of the form of democracy used by Israel, politicians have embarked on an experiment, bringing together all the negative tendencies present in the Jewish people. The new patchwork coalition includes the anti-Israel Muslim party, the post-Zionist Meretz, fighting for the traditions of Lot, as well as Laban. In general, the Laban tradition dominates this government, abundantly represented by the colorless Blue and White, the corrupt NDI (who is in charge of the country's finances),  the Labor socialists, and the only major party, Yesh Atid. Eisav’s tradition is represented by the New Hope Party: its entire program is expressed in hatred and envy – “Not Bibi!” And this flower garden is crowned by the former Zionist party of Yamina (Right), which made it possible to compose this left-handed solitaire.

If we add that the American State Department has labored in drawing up such a political solitaire, providing some of the now ruling parties with money and advisers, it becomes clear what a relief for Israel the expected collapse of this disaster will be.

It remains to recall the sympathy expressed to us once by Leo Tolstoy about such an unfortunate mixing of family traits as in this government: "All happy families are alike, every unhappy family is unhappyin it’s own way" [ii]

[i] Ben Gurion is October 1886 – 1 December 1973) was the primary national founder of the State of Israel and the first Prime Minister.