Jacob Fraden | Why are they shooting?

Jacob Fraden | Why are they shooting?

From the beginning of 2022 to mid-June there were 254 mass murders in the U.S., and 611 last year: more than ever before (according to the Gun Violence Archive, which defines a mass murder as a case where at least 4 people, not including the perpetrator, were killed or wounded). Like all statistics, these numbers can be misleading, for they include the entire spectrum of gun deaths: shootings among all sorts of gangs, drug dealers, street shootings in black neighborhoods, family scandals, etc. However, far more concerning are the senseless shootings of completely innocent people in public places – shopping malls, schools, churches, and synagogues. 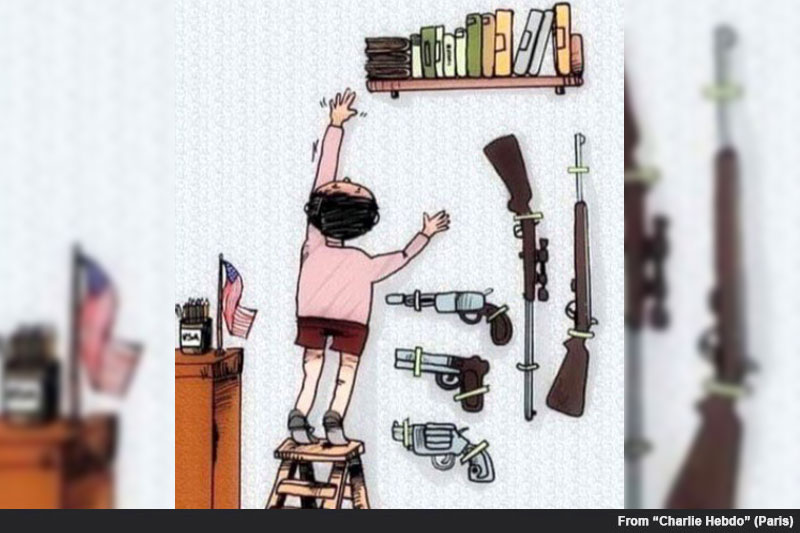 In this essay I will not discuss the broadly proposed solutions to this problem, from the absurd “ban guns completely” to the equally absurd “arm teachers and kindergarten teachers. What I will try to discuss here is not the solution, but some of the causes of the epidemic of shooting random people in public places that is sweeping the country.

According to a study done by the US Department of Justice the typical homicidal shooter has four characteristics: 1) psychosis, 2) a childhood mental trauma, 3) a recent emotional turmoil and 4) the availability of firearms. As we see, three of the four characteristics are abnormal mental states. Well, this conclusion is quite obvious — a normal person would not kill innocent people. Yet another question arises: why has this become an epidemic in the U.S.?

According to the UN registry, there are now 195 countries on our planet (including the Palestinian State, which is not really a state), but nowhere in the developed countries are there as many mass killings and wounding of random people, as in America. Take Israel, for example, which is permanently living in an atmosphere of Muslim terrorism, where the population has a large number of firearms on their hands. However, there are a tenth as many shootings there than in the US (in proportion to the population). So it’s not about whether people have guns, it’s about something else, namely the mental state of people.

What is the reason that makes, say, not gangsters or drug dealers, but seemingly ordinary Americans mentally unstable and prone to senseless crimes? The nature here is beautiful, the climate is very good, the political system — so far nobody has invented anything better, the standard of living is one of the highest in the world. What else is there? That leaves us with a peculiar American way of life which is so different from the rest of the world.

First, let’s look at other nations. In European, Asian and Latin American countries, people traditionally live in communities. In the cities, it’s not uncommon for several generations to live in the same house, or even in an apartment, with grandparents under the same roof. People gather not only during holidays or birthdays, but communicate daily, often go to see each other on different occasions, they meet in the streets, in churches, cafes, transportation, places of work, their children play together in yards and playgrounds, attend Sunday schools and community events. The concept of “my home, my fortress” practically does not exist there. In towns and villages where families live in individual houses, such as in Switzerland, France or Germany, people do not stay in isolation in their “fortresses” but are in constant contact with one another. Churches serve as links and focal points, while centuries of tradition rule the social fabric of daily life. Consider, for example, the Italian “passagiata,” when from 5 to 8 p.m. Italians put on their best clothes and stroll around town to socialize, see others and show themselves off — unheard of behavior in America.

A natural condition for an active and profound social life is the ethnic and linguistic homogeneity of the population, which is the case in most of European and Asian countries. It’s not uncommon for families to live in the same cities or towns for decades or even centuries, to speak the same language, to know their neighbors intimately, to belong to the same churches or temples and participate in community events. People there rarely relocate. Migration from other countries is comparatively small — newcomers in Europe (mostly from Muslim countries) tend to settle in big cities, forming “ghettos,” not mixing with the “natives,” while migrants rarely reside in small towns and villages.

To summarize: in most countries people socialize and communicate with each other often and actively. Man, by his nature, is a social creature. Interaction with other people develops in him a kind of a psychological immunity against stress and neurosis, and that is why in many parts of Europe and Asia people are mentally healthier.

Now let’s look at the American way of life. Here the picture is the opposite. In the U.S., there are some large cities, such as New York and Washington, where the lifestyle resembles that of the European cities and the degree of human socializing is quite high. It’s in these cities, as in Europe, that mass random shootings are exceptionally rare. In New York, for example, the last mass shooting at random innocent people was in 1984 when the maniac Christopher Thomas killed 10 people, mostly children. The way of life in these few cities is not typically American at all. The real America is a single–family dwelling: it is either the suburbs of big cities, or thousands of small towns, or huge “villages” like Los Angeles with millions of single-family homes. It is in this America that random mass shootings take place most of the time. How is it different from similar townships in other developed countries where this shooting problem does not exist to the same extent? The essence of the difference is the lack of close ties between people, and as a consequence, the poorer mental health of the American population as compared with other high income countries. Let’s look at the probable causes:

1. The failure of the Melting Pot. The idealistic dream that immigrants from different parts of the world would live together in America, enriching each other and creating some kind of a unique American culture, has hopelessly failed. These dreams existed until about the mid-1960s. In reality, the U.S. became not a “melting pot” with a hitherto unseen cultural fusion, but rather a “salad bowl”, where all the vegetables are merely mixed up, yet all pieces remain on their own. The United States is a multi-ethnic country, where masses of relatively recent immigrants do not want to “fuse” with their neighbors, but live in distinct groups: the white descendants from Europe, black descendants from Africa, migrants from Latin America, Arabs, Chinese, Indians, and many others. All these groups may literally in the same neighborhoods, but in spite of that they communicate even with the next-door neighbors in very limited ways. Ethnic and linguistic diversity fractures the population into non–fusing pieces.

2. The failure of the Great Society. In the mid-1960s, President Johnson announced the Great Society program to reduce poverty, eliminate racial injustice, reduce crime, and protect the environment. While some of the original goals were achieved, the results of this experiment were very disappointing. One of the worst results was the destruction of the black family. Whereas before this program, America’s black population was making steady progress closing the racial gaps owing to their moral, industrious, and religious tendencies, Johnson’s initiative short circuited the process. Through attempts to compensate for racial inequality with free handouts and other privileges, The Great Society incentivized fatherless families and vastly increased the number single-parent female-headed households.

Today, more than 80% of black children do not know who their fathers are, and the level of education is obscenely low (only 15% of black 8th graders can read plain text, compared to 42% of whites, which, by the way, is also shamefully low). The results of fatherlessness and lack of education are higher crime rates, impaired intellect, and blacks dropping out of public life. Black teenagers are the most frequent victims of shootings in black neighborhoods.

3. The polarization of society. In our time, a sharp polarization has arisen in the American society, which under Obama grew to unprecedented proportions. Confrontations between conservatives and the progressive left have reached an extreme intensity, almost to the level of religious fanaticism. There are fundamental disagreements on nearly every issue facing the country: gun control, border protection, abortion rights, and so on. In essence, the country is in a state of cold civil war, emotional tension is rising and as with two electric charges of the opposite sign at a sufficiently high voltage — a lightning strike is unavoidable. A mentally unstable person of low intellect is unable to perceive logic and think rationally, feeling the desperation of the situation, may taks up arms as the only understandable way to resolve the mental conflict.

4. The widespread use of antidepressants. In the U.S. 18.1% of the population suffers from various kinds of mental disorders. Approximately 5% of schoolchildren are diagnosed as depressed, and in such cases, doctors usually prescribe antidepressants. These drugs, however, are a double-edged sword. On the one hand, they help with depression, but if for some reason the patient stops taking them, he/she can develop dangerous symptoms, including manic psychosis, violent mood swings, suicidal thoughts, and even personality disintegration.

5. Population mobility. Americans are a very dynamic people. Each year more than 9% of the population moves from place to place. There are many reasons for moving, but the main cause is a job change. The average American employee works in one place for about 5 years, and then changes job and sometimes moves their residency. Businesses also relocate and take their employees with them. Because of frequent relocations, families don’t have time to anchor and put down roots, friendships are severed, traditions don’t develop. People live quite lonely in the new places, making only a small number of acquaintances and friends, thus having very anemic social life.

There are also other characteristic features of the American way of life, but the above is enough to make the key point clear: American society is fragmented, people live isolated in their homes, with few contacts with neighbors and acquaintances, and loneliness provides fertile ground for emotional problems. Unlike Europe, where the saying goes, “Europeans work to live, but Americans live to work”. There are comparatively fewer contacts with neighbors, coworkers (outside of work hours), or friends. Church is attended at best only on holidays. Children after school stay alone in their rooms, playing computer games, where one has to quickly “shoot” on the monitor screen as many “bad” characters as possible.

If a lonely person has emotional stress or other mental problems, he usually doesn’t find soothing or resolution at home or community. keeping the problem locked up inside the mind. Loneliness is not conducive to peace of mind, emotions seek an exit, and the exit can take different forms, sometimes very nasty and dangerous ones. The outburst can be a scandal in the family, a conflict with the boss, onset of depression, etc. In extreme cases, an emotionally unstable person may even commit suicide or grab a gun to pour out their feelings on complete strangers. In cases when depression takes violent form in a lonely teenager having a mind with a blurred borderline between reality and a computer game, without thinking rationally,  he can get a firearm to kill as many as possible real people, that incidentally look alike to the virtual ones on the game monitor.

I am afraid this problem has no solution — it’s impossible to change the way of life in the country.