We received this coverage of the last week March of supporters of President Trump in Washington DC just today. This is a fact that was captured by a one of the March organizers from Boston, predominantly democratic state. She compares the fact on the ground she saw with her own eyes with its coverage in the mainstream media. The lies of American biggest media about the march reminded her about the worst samples of the soviet propaganda.

Write your comments, send your own testimonies and impressions of the march and other events that you encounter in your daily life – and this will be your voice about the 2020 elections. Our email address is info@kontinentusa.com 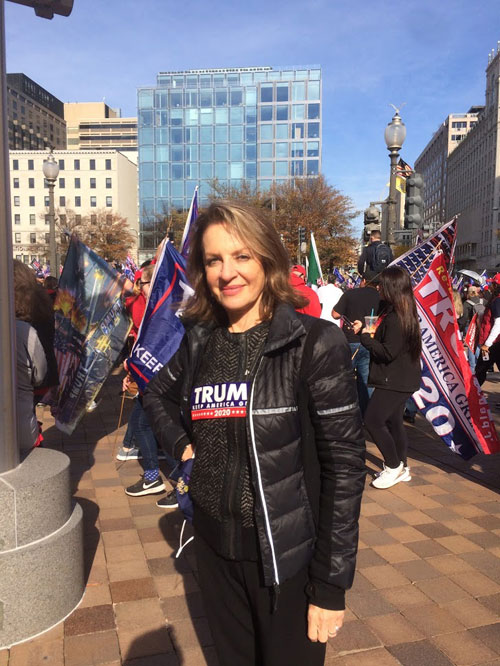 Half of my life I spent in the USSR. There were two major newspapers – Pravda (The Truth) and Izvestiya ( News). There also was a joke – there is no truth in Pravda and there is no news in Izvestiya. We all knew that, and we got used to live surrounded by lies. While in Russia, we listened to the Voice of America. It was our source of the truth. We could not imagine in our worst nightmare that this voice would ever change, that the newspapers and radio in America, the best country in the world, would purposefully and constantly lie to us.

I just want to give you a couple of very recent examples from Million MAGA MARCH in Washington to prove my points.

1. Number of participants. According to the calculations of eyewitnesses (including myself), taking the area size and the density of a crowd, it was well over $500,000. I have never seen so many people in my life. Just for comparison, it’s commonly accepted that Copacabana Beach in Rio De Janeiro usually has more than a million people for New Year’s Eve. I was in Rio in 2017, and the number of people at our March felt quite comparable.

2. Who was there? There were people of every color, race, age and breed – Vietnamese, Chinese, Latino, Jewish, Blacks, Whites from literally all states of the Union. Children, young adults, older people, veterans, gays, marines – laughing, chatting, celebrating their common devotion to liberty and demanding fair elections. No violence, no calls for revenge. From 8 am when we arrived until 5 pm when we left, I saw just 2 opponents. A black women who greeted us at the bus station with a laconic but powerful message “F… Trump”. She was following us repeating it for about 10 min., but since no one engaged into conversation, she left unsatisfied. Another one was a white man with Biden-Harris sign standing in the middle of the crowd. He was disappointed as well because he did not ignite any fight. I don’t know whether he was hired or was there on his own, but his mission was definitely not accomplished.

And that is what media reports:

– NBC NEWS: ‘Among the demonstrators were conspiracy theorists, right-wing activists alleging widespread election fraud and members of the Proud Boys, a far right, all-male group with a history of violent confrontations.’

Maybe, the Proud Boys were there, but they were not seen or heard. The permit for the March was received by Women for Trump, and 99.99% of the crowd were hard working, optimistic Americans exercising their First Amendment rights. There was not a single window broken, not a single store looted and the streets were clean and orderly.

The buses with Antifa arrived late at night when majority of the demonstrators already left. They started abusing Trump supporters at restaurants and in the streets in a desperate hope to turn the peaceful demonstration into chaos. Besides a very few minor clashes provoked by the opponents, there was not much to write about.

Nevertheless, the media still tries to diminish the historical importance of this March in Washington – underestimating the numbers of demonstrators, calling them white-supremacists, blaming them for violence, etc. Against all the facts, in a communist hope that if you repeat a lie many times it will stick. No, it will not – because people born in freedom will not tolerate this. Forget intellectual elite, forget our ‘aristocracy’ in Hollywood, forget big corporations and social media moguls – this land is much bigger than that. There are millions of normal, hardworking, independently thinking people who know what they want and are not afraid of standing up for that – AMERICANS.

This March was the Voice of that America. I can hear it loud and clear through constant lies and brainwashing by Pravda (CNN) and Izvestya (New York Times). It gives me hope and confidence that 30 years ago when I was leaving Russia I did the right thing and not just traded one Big Brother for another.