New York Times https://www.nytimes.com/2020/07/16/arts/music/opera-race-representation.html
As the industry rebuilds from the coronavirus pandemic, it must face long-simmering issues of representation. 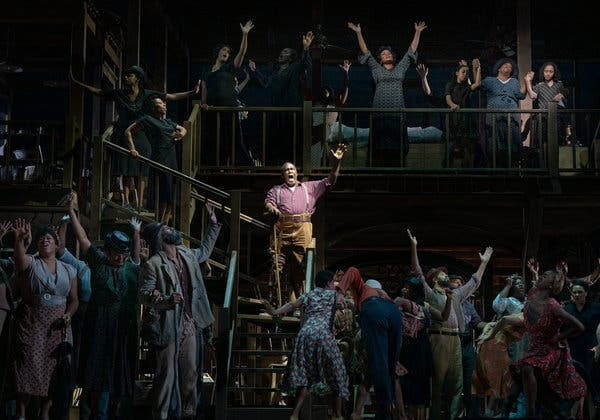 “Porgy and Bess,” which opened the Metropolitan Opera’s most recent season, featured an almost exclusively Black cast but was directed and conducted by white men — an example of how the art form has historically elevated some singers of color while remaining overwhelmingly white offstage.Credit...Sara Krulwich/The New York Times

Opera Can No Longer Ignore Its Race Problem 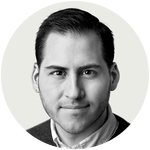 By Joshua Barone
In late May, shortly after the killing of George Floyd, the mezzo-soprano J’Nai Bridges was invited by Los Angeles Opera to give a virtual recital.
“As much as I wanted to, I wasn’t in the right emotional space to present myself in that way,” she later recalled in an online discussion with the tenor Lawrence Brownlee. So she made a counteroffer: What if she assembled a group of fellow Black singers for a panel on race and inequality in opera?
The company said yes, and as Black Lives Matter protests raged across the country, Ms. Bridges moderated a nearly 90-minute conversation of striking scope and candor — by turns a group-therapy session and an improvised manifesto for the future of an art form that historically has elevated select singers of color while remaining overwhelmingly white offstage, from the rehearsal room to the board room. 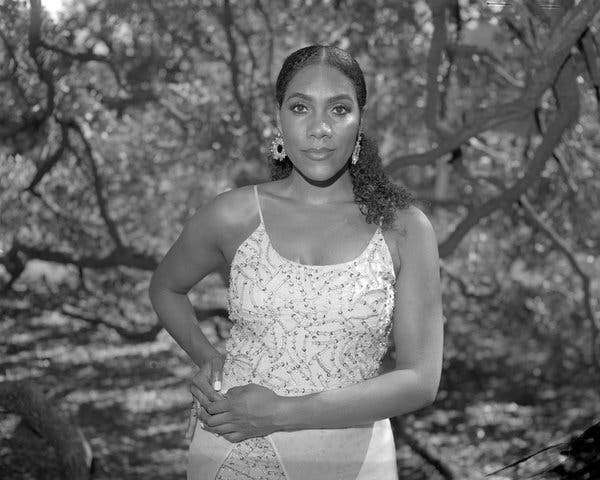 The mezzo-soprano J’Nai Bridges, who recently led a panel discussion with fellow Black singers about race, inequality and opera.Credit...Rahim Fortune for The New York Times
Airing as a Facebook Live video, the panel has since been seen by more than 60,000 people. It should be required viewing for all leaders of American opera companies, and sent to the members of every board. Because if there ever was a moment for sweeping change, it’s now.
The coronavirus pandemic has closed theaters nationwide, forcing companies, whose seasons are typically scheduled far in advance, to rethink the coming years with a level of flexibility and creativity that once seemed unimaginable. But with upheaval comes an opportunity, and the end of excuses, to truly reform opera’s culture — to place anti-racism front and center as the industry rebuilds itself.
HOW TO CHANGE CLASSICAL MUSIC
Black Artists on How to Change Classical Music


July 16, 2020
Opera companies can start by simply paying attention to what Black artists are saying in discussions like the one organized by Ms. Bridges, or in online talk shows such as Mr. Brownlee’s “The Sitdown With LB” and the soprano Karen Slack’s “Kiki Konversations.” While the problems that have come up in these conversations are nothing new, they have new urgency at a time of racial unrest that many say just feels different — a time at which, as Ms. Bridges put it, “people are listening.”
Image

The panel was organized with Los Angeles Opera and featured, clockwise from top left: Julia Bullock, Karen Slack, Morris Robinson, Lawrence Brownlee, Russell Thomas and Ms. Bridges.
Mr. Brownlee and Ms. Slack were among the artists who took part in her panel, which also included the soprano Julia Bullock, the bass Morris Robinson and the tenor Russell Thomas. The stories they shared would amount to a human resources crisis in any workplace: Christopher Koelsch, Los Angeles Opera’s president and chief executive, said in an interview that his initial reaction to the video was “horror and sorrow that the lived experience of those artists went unheard in that raw way.”
Reflecting on police brutality and the racist threats made against Christian Cooper while he was bird-watching in Central Park, Mr. Robinson said in the discussion that he has always known that something similar could happen to him.
“I walk around every opera rehearsal I’ve ever been to guarded,” he said, “cognizant of the fact that my interaction needs to be very public, in front of everyone, and very innocuous, such that all doubts, all potential images, are eradicated.” 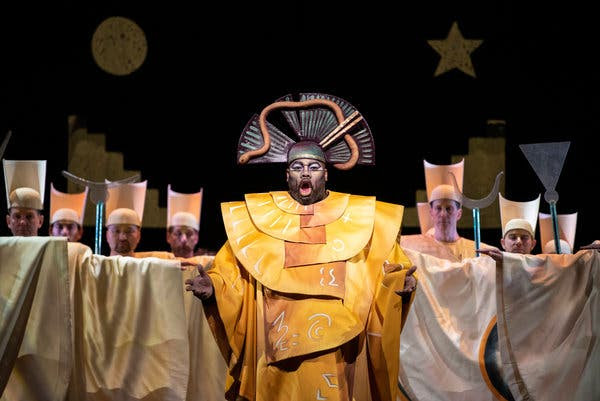 Mr. Robinson as Sarastro in Mozart’s “The Magic Flute” at the Met.Credit...Jonathan Tichler/Metropolitan Opera
He described casual indignities he has experienced throughout his career, such as the dissonance between the praise he receives onstage and the slights he encounters away from it: being told by an audience member that a light was out in the bathroom, or being asked by another where he parked the bus. He and Mr. Thomas, during a summer run of Verdi’s “Il Trovatore” in Cincinnati, attended a board leadership party where they felt forced to keep their cool in the face of brazen racism from a white donor.
“I still have to come and do my job because I still want to get that check,” Mr. Thomas said. “I have children to feed, a mortgage to pay.”
There was a collective sigh of exasperation at the mention of how Blackness in opera more or less ends onstage. “In 20 years, I’ve never been hired by a Black person; I’ve never been directed by a Black person; I’ve never had a Black C.E.O. of a company; I’ve never had a Black president of the board; I’ve never had a Black conductor,” Mr. Robinson said. “I don’t even have Black stage managers. None, not ever, for 20 years.”
The Metropolitan Opera, the nation’s largest opera house — indeed, its largest performing arts organization — paints a telling picture. Its board of 45 has only three Black managing directors. Of the 10 people on its music staff, one is Black; of the 90-member orchestra, two. The Met has presented 306 operas in its 137-year history, none of them by a Black composer. (That will change when it stages Terence Blanchard’s “Fire Shut Up in My Bones” in a coming season.)
Last season opened with a production of “Porgy and Bess,” which despite having an almost exclusively Black cast — as required by the estate of its creators, the Gershwin brothers — was directed and conducted by white men (though choreographed by a Black woman, Camille A. Brown). At the bare minimum, Mr. Thomas said, that can’t happen anymore.
“Stop allowing white people to tell Black people about the Black experience,” he said. “That, to me, is outrageous. Don’t tell me about how I should feel to be Black and how I should move.”
Ms. Bullock, who early in the conversation said “I’m getting so tired of trying to make peace within myself,” called for an anonymous survey to identify patterns of racial inequity in the field, including at conservatories. Ms. Bridges said in a later interview that, similar to sexual harassment workshops, companies should mandate racism and diversity training.
Ms. Slack’s demand, she said in the video, amounted to no more than “humanity”: “I’m not asking for your seat. I’m asking that you move over so I can sit in mine, and you be OK with that.” 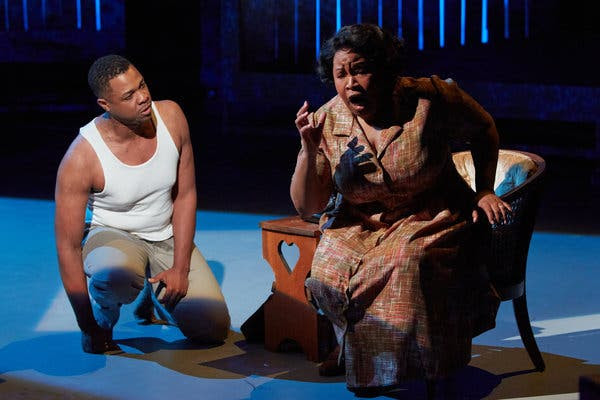 Davóne Tines, left, and Ms. Slack in Terence Blanchard’s “Fire Shut Up in My Bones” at Opera Theater of St. Louis last year. The work will travel to the Met in a future season, and become that company’s first staged opera by a Black composer.Credit...Eric Woolsey
There are signs that leaders in the opera world are listening, though that is only one step toward progress. “It’s very easy right now to be an ally,” Mr. Brownlee said in an interview. “But what I have charged people to do is be deliberate. I told my agent, I told general directors: Now is the time to put your money where your mouth is.”
Some Black musicians, like their counterparts in other fields, bristle at the idea of being a teacher to their white colleagues. It’s not their responsibility, but it is something that Ms. Bridges, an ambassador for the Coalition for African Americans in the Performing Arts, said she is passionate about, adding that during the past month she has been in conversation with numerous organizations that reached out to her.
For its part, Los Angeles Opera, Mr. Koelsch said, “will commit that on every level of the company’s operations, this work is central.” The Met — which didn’t ban the use of blackface in its productions until 2015 and whose reigning diva, Anna Netrebko, has demonstrated and defended the racist practice on social media — announced in June that it would hire its first chief diversity officer. Peter Gelb, the company’s general manager, said in an interview that the Met would also revamp its traditionally unpaid internship program, introducing payment and a campaign to actively recruit a diverse pool of applicants.
“It’s all going to be a long-term project, which is starting now,” Mr. Gelb said.
That is the hope of Black artists — and activists more broadly — who worry that the widespread support among white people this summer may only be temporary. “I don’t want this just to be a hashtag or a one-time thing,” Ms. Bridges said. “This needs to be an ongoing conversation, forever.”
How to Change Classical Music
Black Artists on How to Change Classical Music
Nine performers describe the steps they recommend to begin transforming a white-dominated field. 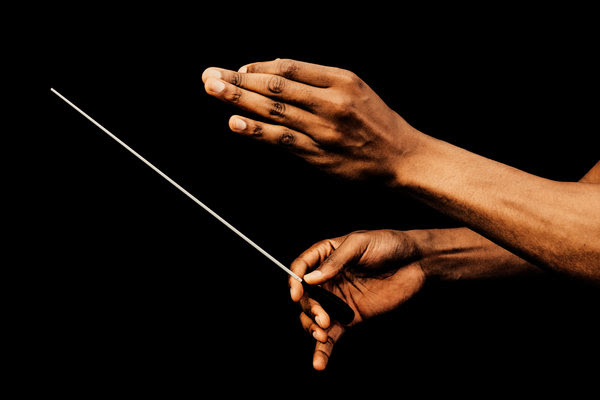 To Make Orchestras More Diverse, End Blind Auditions
If ensembles are to reflect the communities they serve, the audition process should take into account race, gender and other factors.


July 16, 2020
Ђ
Joshua Barone is a senior staff editor on the Culture Desk, where he writes about classical music and other fields including dance, theater and visual art and architecture. @joshbarone • Facebook