The mainstream media continues focusing their attention on a strange behavior and unpredictable leadership of the President of the United States Donald Trump, especially after he has been tested positive for coronavirus. 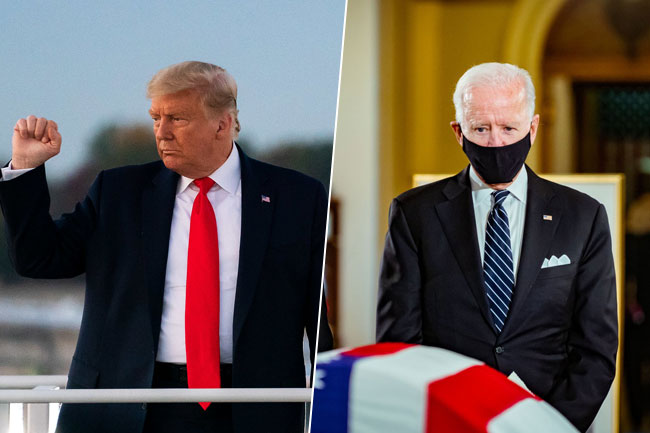 Why did it happen? For the media, the case is perfectly clear—this is not a tragic accident! This is a result of an immature and irresponsible, reckless and self-destructive behavior of the president, but most of all, lack of leadership.

Isn’t that immature and irresponsible for Trump to waste so much energy on flying back and forth around the country relentlessly instead of sitting out at home during the deadly infectious disease COVID-19? Hello, there are means of safe virtual communication available!

Isn’t that reckless and self-destructive to take such enormous health risk, needlessly, by attending numerous rallies and speaking for hours directly to huge crowds of his supporters, outdoors and indoors. Coronavirus loves those who lives dangerously, moves constantly and who is under enormous amount of stress. But defying the danger, Trump does not even wear a mask making himself a perfect target for coronavirus.

In stark contrast with Trump is his opponent, the former Vice-President of the United States Joe Biden. His behavior and leadership are praised by the same media as mature and responsible, cautious and disciplined.

As a mature and responsible leader, Biden is out of sight sitting out in his isolated bunker for months saving his energy and avoiding any health risks—there is a pandemic out there, folks!

He is cautious and disciplined wearing a mask even when sitting in the safety of his basement, while leading his troops via virtual communication. He mitigates his stress level (considering his age)—he limits his workload; does not travel too much; does not meet with too many voters, (even with friendly reporters), who may irritate (or confuse) him with their obnoxious or tricky questions.

So, why is Trump doing all that? Because he is irrational, if not stupid, leader, speculates the media. Some sources even consider him to be mentally unbalanced (insane) and, thus, unfit to discharge his duty.

Really, only an irrational leader has to fight so many adversaries—all of them simultaneously and alone. But Trump is ready to fight—anyone, anytime, anywhere—from unfriendly leaders of Congress to malevolent domestic reporters. Moreover, without hesitation, he goes on the attack against heads of powerful hostile powers, even against allies, if he thinks they are trying to take advantage of or do harm to the US? By rocking the boat dangerously, he takes great political risks unlike any of his cautious predecessors in the White House!

In addition, he is willing to take not only political and health risks, but personal financial risks too—his enemies are ruining his family business, and he is losing his own money by truckloads. But he keeps on working day and night, listen to this, for…free! He is the first president-volunteer! This is nuts!

In contrast, Biden plays a nice guy at home and avoids confrontations with foreign leaders preferring the status quo. He does not rock the boat even if the interests of the country require that. He is rational and sane, all right, judging his behavior at least by how he takes such a good care of the interests of his family business and multiplies the wealth of the family members taking advantage of his status and influence? That what some rational and smart presidents were doing before him!

What a contrast between two opponents! Black and white! Trump defies common sense, while Biden is the embodiment of common sense himself! That’s why Trump got sick, but Biden didn’t.

…Just a minute! There is something wrong here—too many burning questions! Does this picture painted by the media seem to you oversimplified and bias? Maybe it is wrong to look for common sense in Trump’s behavior and leadership applying the criterion of the common sense itself. Maybe his behavior can be explained better by different motives.

By the same token, it may be wrong to paint the difference between Trump and Biden in black and white. Maybe different colors can explain it better. Like Red and Brown!

Oh, just relax! This is not what you think. This has nothing to do with communism or Nazism, or about ideology. This is about a war! The 2020 presidential elections have been waged by the rules of a real war since the very beginning, and the voters need to know what colors their leaders are flying when leading their troops into battle!

Here is an amusing British urban legend that may answer these burning questions (allegorically, of course).

During a war between France and Britain, a French general arrives at the Headquarter of the victorious British Army to negotiate a truth. Before leaving, he dares to ask a British general a burning question that has been torturing him for a long time and does not let him sleep at night.

“Isn’t that irresponsible and reckless for British officers to wear a bright red coats in combat endangering themselves? Don’t they understand that it is self-destructive and just stupid to go on the attack in the red uniform making themselves a perfect target and risking their lives, needlessly?”

“The soldiers will follow an officer toward the deadly dangerous enemy lines if they feel he is fearless,” answers the British general. “But they may become demoralized if they see that he is wounded. The red color was chosen purposely because it wouldn’t show the blood on the red coat.”

After the French general, stunned and confused, submitted his report to his superiors, the French army has changed the color of their uniform. Since that time, the French soldiers have never been demoralized on the battle field—their officers wear…yellow-brown pants.

So, there are two types of behavior and leadership styles during the war. Some leaders wear red coats, and some—brown pants.

Trump in the bright red coat is leading his troops into battle inspiring them to follow with his bravery despite being a perfect target and risking his life. And his blood did not show on his red coat after he was wounded!

In contrast, Joe Biden is leading his troops in yellow-brown pants hiding in his basement, the basement being wisely painted in a yellow-brown color too to mitigate any risks…just in case.