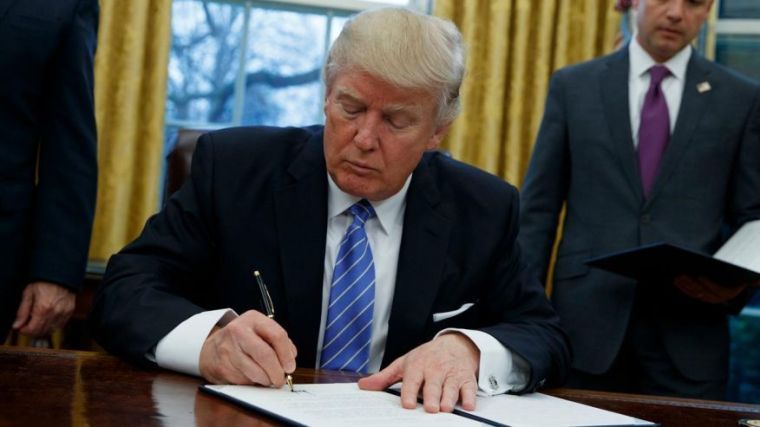 Checkmate! George Soros’ millions are now worthless in his political war with Donald Trump! King Soros has no balls! Trump’s move was another brilliant “Art Of The Deal!
A document from the Federal Elections Commission (FEC) indicates that Donald Trump took steps last week to outmaneuver nonprofit organizations, leaving them unable to officially campaign against him over the next few years of his Presidency.
Filed on January 20th, 2017, the letter states that, while not an official announcement for reelection, Donald Trump has filed an FEC Form 2 in order to “ensure compliance with the Federal Election Campaign Act.” This is an unprecedented, although legal, move for the President to make. Barack Obama did not file for his 2012 re-election bid until April 2011.
Having filed (even if not formally announcing a bid) as a candidate, Trump will be able to coordinate with PACs and other similar organizations.
More importantly, 501(c)(3) nonprofit organizations would no longer be able to engage in “political speech” which could theoretically affect the results of the 2020 U.S. Presidential Election without running the risk of losing their nonprofit status.
The move effectively bars interest groups from creating nonprofits which they could funnel money into for the purposes of opposing Trump’s initiatives.
This will create chaos for political opponents of Trump such as George Soros, who has sunk significant amounts of money into various nonprofit groups with the intent of opposing Trump’s government. How 501(c)(3) organizations will comply with the FEC’s regulations when participating an actions which qualify as political speech remains to be seen.
The move is consistent with Trump’s campaign promises to reduce the financial influence of private special interest groups on Washington.
President Trump is a master of three dimensional chess. Unmatched in the history of politics. He is running rings around the out dated establishment!
For you snowflakes out there: he is not going to allow you to turn our country into another seething viper pit that is Europe! Don’t like him….maybe you can hitch a ride on the Hollywood Train to Canada!
For more information exposing Soros and his precious Bilderberg Group – an annual gathering of 130 of the Western world’s top financial, corporate, political, academic, media, military and policy elites, held every year since 1954 – Check out the following link: